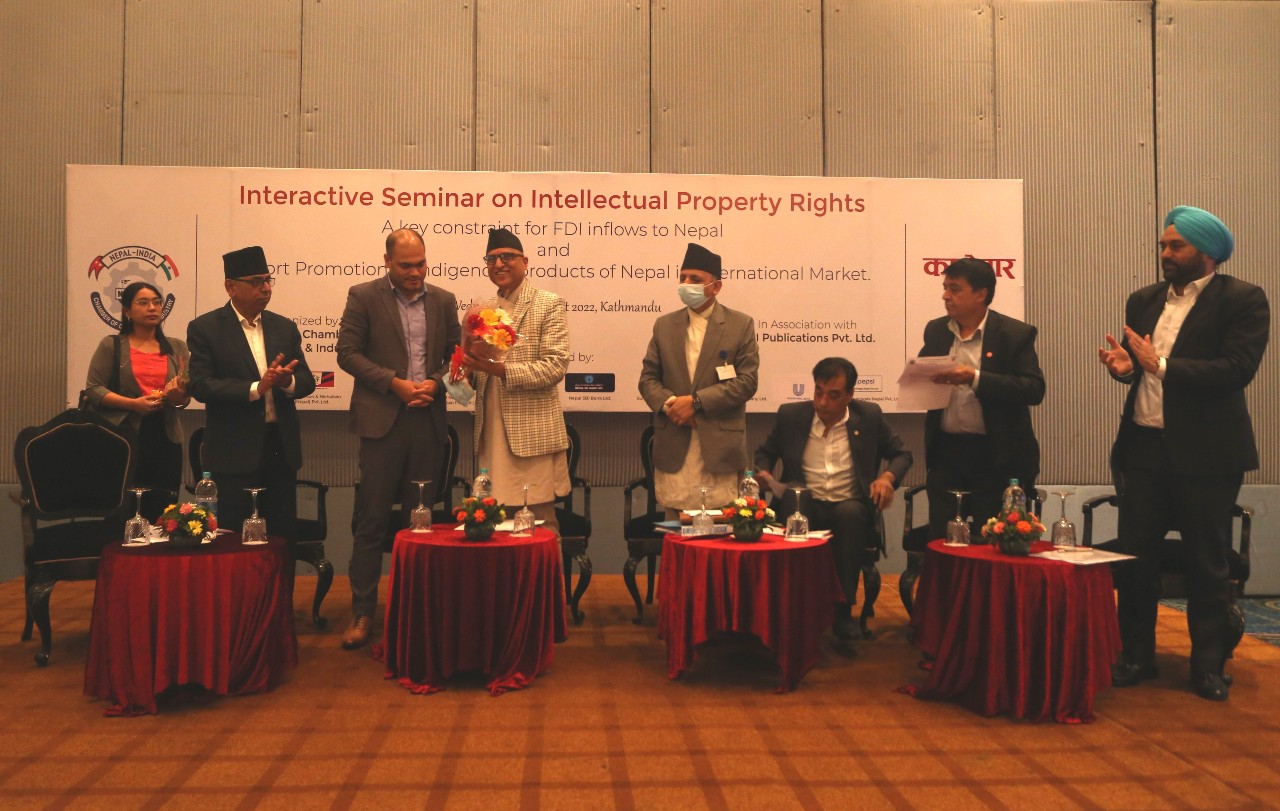 NICCI organized an Interactive Seminar on Intellectual Property Rights, A key constraint for FDI Inflows to Nepal on 17th August 2022 in Kathmandu.

Officiating President of NICCI Mr. Sunil KC highlighted the importance of IPR in present context as we have not been able to secure inflows of FDIs as well as promoting our Nepalese brand in our own domestic market as well in an International market which we need to focus when we are seeking FDIs at large. Mr. KC further added that IPR is a broad terminology, also includes Trade Marks, Patent, Copyright and many other technical aspects, but we are missing benefits due to poor legal provisions based on 55+ years old Act and Regulations and because of our existing IPR rules, which are not at par with WTO norms and WIPO (World Intellectual Property Organization) standard–has hunted the potential FDI into Nepal.

Vice President of Confederation of Nepalese Industries (CNI) Mr. Krishna Prasad Adhikari added that we have not been able to sorted out the issues related to IPR as the law could not be updated as per the present international practices while addressing the program that even though we have a IPR Law.

Senior Vice President of Federation of Nepalese Chambers of Commerce & Industry (FNCCI) Mr. Chandra Dhakal also highlighted on the need of appropriate IPR law. Mr. Dhakal further added that due to lack of IPR Law Foreign investments are not coming as expected even though we have huge potentiality and opportunities for foreign investors to invest.

Mr. Rajendra Mall, President of Nepal Chamber of Commerce (NCC) emphasized on the need of  export oriented policy to brought by the government to minimize trade deficit and for that government should work closely with the private sector representatives. When we are talking about the IPR it is not only the issue of bi-national or multinational companies, it is also the issue of our own Nepalese companies also. Due to lack of proper effective law, many of our brands have been affected badly in their export so these also needs to be looked into.

On the program Senior Advocate and IPR Expert Mr. Sajjan bar Singh Thapa informed that the IPR Law we have in country is 57 years old and it has not been updated or amended since last 16 years.

In the Seminar, presenting the presentation from Bi-national Industry perspective, Mr. Ravi Kumar Rayavaram, MD, of Surya Nepal Pvt. Ltd. added that Now in this 21st centure where digitization has taken place in every sector the IPR issue has been one of the major for the investors to protect their intellectual property.  Mr. Rayavaram further added that today though the 1/3 of world’s total economy is based on intellectual property, IPR related law is really very weak in Nepal. It is surprising to see that the foreign prestigious and well established brands have been registered here by some other local company and earning and due to that also International brands and companies have not been able to come and invest in Nepal due to that weak IPR law in Nepal.

Mr. Amirn Pratap Rana, CMD of Kiran Shoes Manufacturer, a manufacturer of Goldstar Shoes, also shared his experience that how his company has been facing the problems due to lack of poor IPR law in country. Their brands have been used by other local as well as foreign companies and they have been filing the cases in both Nepal as well as in out side Nepal so as to protect their brand and IPR.

Chief Guest Minister of Industry Hon’ble Dilendra Prasad Badu has reiterated the government’s commitment for the protection of IPR to promote the brands and investors and also to motivate the creative individuals and intellectuals for their intellectual property. Minister Badu further assured the participants that the drafted bill which is currently submitted to Ministry of Law, Government of Nepal will be shared and consulted with Private Sector stake holders as well and take necessary decision for the promotion of Investments and also to bring more FDIs into Nepal.

Giving the Vote of Thanks, Vice President of NICCI Mr. Harkirat Singh Bedi also added that since the IPR issue is the issue of all in present digital age and really very important one as it directs the investment flow in the country. Nepal being a most opportune destination for the foreign investment we all should think why the FDI is not coming as we had expected and requested Government also to think on this seriously on IPR.